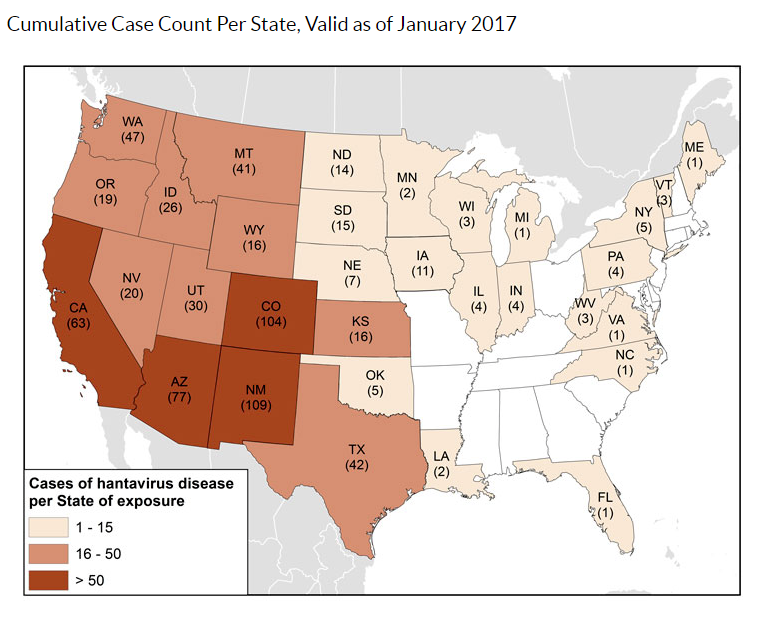 The hantavirus disease is a virus typically carried by rodents. It is found in the white-footed mouse, cotton rat, rice rat and deer mouse. Of these, the deer mouse is perhaps the most common carrier of hantavirus. Deer mice excrete hantavirus in their droppings, urine, and saliva and people most usually contract the virus when these materials are stirred up, making it airborne.

Persons can get exposed to hantavirus disease by breathing contaminated dust post cleaning or disturbing rodent droppings and nests. They can also contract the virus by working and living in rodent-infested settings. It commonly leads to Hantavirus Pulmonary Syndrome (HPS). HPS is essentially an infectious disease with flu-like symptoms that can advance rapidly to potentially severe breathing problems.

The Centers for Disease Control and Prevention (CDC) report gives us reason to worry. As of January 2017, there were a total of 728 cases of Hantavirus infection reported in the United States. It included people with medically confirmed hantavirus infection with either HPS or non-pulmonary hantavirus infection. Out of these statistics, from 1993 onward, 697 cases occurred after the first identification of HPS. The remaining 31 cases were identified retrospectively. Notably, 36% of all reported HPS cases claimed lives.

As a resident of Colorado, you want to especially look out as the diagnosis of a Denver resident with hantavirus was reported on March 6, 2018 in The Denver Post. Though the disease is usually found in rural and suburban regions, this person got infected in Denver itself. As the individual did not leave the county, investigators were certain that the virus was picked up somewhere in Denver. Such an occurrence is rare, but it also rings an alarm for people in Colorado.

Hantaviruses are primarily transmitted to people via the aerosolization of viruses shed in the excreted matter of infected rodents. For instance, a broom used to clean up mouse droppings in the attic may usher into the air tiny particles of stool containing hantaviruses, which you can then unknowingly inhale.

Once you breathe in hantaviruses, they reach your lungs and begin invading tiny blood vessels named capillaries, eventually causing them to leak. Your lungs then tend to flood with fluid, which can spark any of the respiratory problems related to HPS.

At present, people infected by the North American strain of HPS are not really contagious to others. However, certain outbreaks in South America have witnessed transmission from person to person.

How Can You Prevent Contraction of Hantavirus?

You want to keep out rodents from your home and workplace. Always remember to take precautions when cleaning, trapping, and sealing rodent-infested areas. Try the following tips for preventing the intrusion of deer mice:

As mice can squeeze through spaces and holes which are as wide as 1/4 inch or 6mm, you want to block all holes with cement, metal, or wire screening.

Keeping the place free of food is an excellent way to keep out deer mice, as they mostly intrude seeking food. You want to maintain clean floors and counters which are devoid of food crumbs. Also, wash your dishes promptly and make it a point to store your food, including that of pets, in tight, rodent-proof containers. Garbage cans also need to have tight lids that cannot be easily moved by mice.

You want to clear grass, brush, and all junk and unnecessary material from the building’s foundation. When there is lack of material for mice to nest and breed, there will be lesser chances of them infesting the premises.

If you suspect deer mice to have already been frequenting the premises, setting up traps is a great way to do away with the menace. You can lay spring-operated traps along baseboards. Poison-bait traps can also be used. However, it has to be done cautiously as poison has the possibility of harming people and pets as well.